The October expedition concluded the field researches for 2009. Additional information of the object vicinities of the "Ushtogai square" was gathered through surveys and interviews among the local population.
In one district it was discovered that hillocks viewed in pictures were heaps of coarse-grained river sand containing fragments of ferry-concrete designs and slate. On November 24th 1972 an underground nuclear explosion for the purpose of seismic sounding was conducted nearby the given site. Probably, the heaps of sand and building dust is residue from spadework of the spent nuclear explosion. 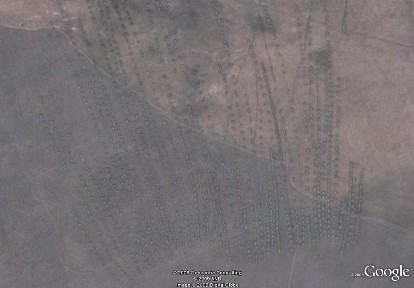 Having arrived at the object the "Ushtogai square" we surveyed the eastern part of the neighborhood. Plural multi-colored ruins located on a height at the river Saryozen strongly contrasted with a typical steppe landscape, creating a surrealistic impression. We did not find any traces of anthropogenesis character, and it appeared as though we were the first humans to ever reach this spot on earth. In the Ushtogai settlement we were told that the older residents had in the past seen the remnants of some stone structures on the ledge on which the settlement was located. The fear caused that in days of socialism at building of the agricultural objects which ruins we observed in settlement, as a building material stones collected with all neighborhoods were used. And even there was an incident when builders have started to assort mazars.

We went to the site we had identified. The reference point was the hole, as we had been told that there, a bulldozer rooted out stones from any structure. Once locating a hole with obvious traces of work involving heavy techniques, we agreed to the object survey, and immediately found something appearing to be the wall rest. Some flat stones that combined against each other formed a small shaft, and it appeared as though binding sand was used between the stones. Day came to an end, and our inspection as well because we did not plan to spend the night. We started for Kostanai, which was 300 kilometers away.