The Turgai plateau settles between the southern Ural Mountains and the Mugodzhars in the west, and the Kazakh melkosopochnik with raisings of the Kokchetav and Ulutau Mountains in the east. Unlike the territories to be mentioned next where folded Paleozoic structures surface, the Turgai plateau represents an epigerzinsk platform formation with rather deep burial of the Paleozoic base. Tectonically, it has a complicated correspondence with breaks of the Turgai syneklize, connecting along the Western-Siberian plate with the Turan plate, as well as to northern ledge of the Turan plate.

The Turgai hollow is on a lowered narrow strip extending to the south in the middle of the described territory, almost in meridian direction. Absolute heights here are 100-125 meters. The chain of numerous lakes with the big lake Kushmurun in the north into which the river Ubagan flows was extended on the hollow in the south, from where the river Turgai preceded. A cover from ancient alluvial and lake-alluvial adjournment lay at the bottom of the hollow.

To the west and the east of the Turgai hollow the height increases to 200 meters, sometimes to 300 meters. The surface is combined by horizontal layers of paleogene and neogine adjournment. Paleogene (oligocene) is represented mainly by the solenoid clay and alluvial lake precipitation, and the neogene (miocene) mainly by continental sands.

The northern part of the Turgai plateau was poorly dismembered, where low hills and lake hollows are characteristic. To the south of the plateau, dismemberment was ordered by a system of hollows on the isolated table heights. Some that are lowered had transformed into flat remains, which tower over flat-bottomed hollows only by some meters.

The remains at the Stolovo-Ostantsovajaplain has a network of beams and wide valleys where small rivers are drying up, and a flat retraction in which salty lakes nestle. The partition at the ïëàòîîáðàçíîé surfaces on table heights, a consequence of the strengthened erosion during a period of more damp than now, evidence to a climate corresponding to an epoch of maximum freezing in the north of Eurasia. Later, in conditions of sharp continental arid climate processes, a deflation and a gullied partition of edges at table heights developed. 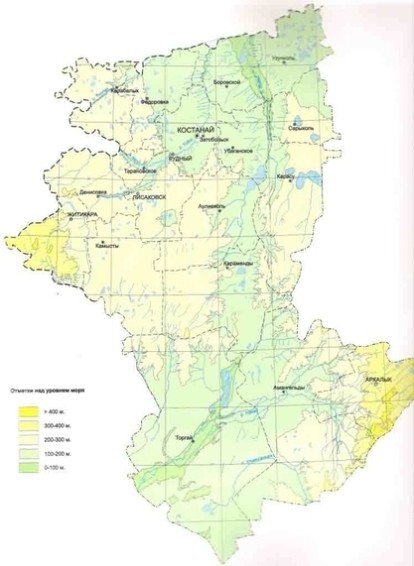 The Turgai hollow can easily be viewed on both maps. 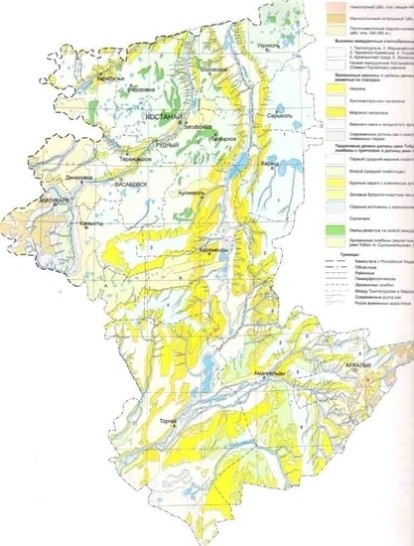